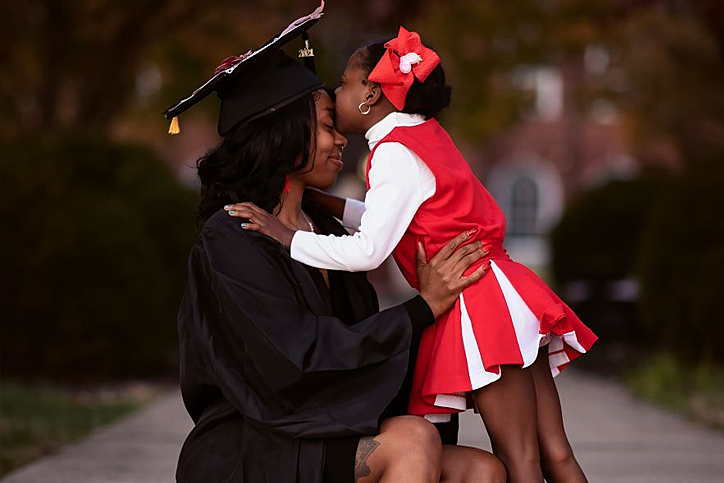 We love helping empower single parents to complete their degrees and create an abundant future for their families. Congratulations to Christaine Patton, 2021 Fortera Foundation Bridge Scholarship recipient, on her achievements and recent graduation from Austin Peay State University.

The following story and photo are posted with permission from APSU. It originally appeared at https://www.apsu.edu/.

“Going back to school with a daughter is challenging but rewarding. I really want to set an example for my daughter and show her that it doesn’t matter what you go through in life.”

But that’s not all. She also is also the author of two urban novels and a book of poetry, and she’s the mother of a young daughter. Also, as a college student, she’s spent the past year focusing on her studies in order to graduate in December – a goal she almost didn’t complete.

“I originally went into college for a semester in 2012 as a traditional student,” Patton said. “Then I became pregnant with my daughter and had other priorities.”

Patton re-enrolled at Austin Peay in 2016, ready to immerse herself in the Department of Communication.

“The professors here personally invest in you and they make sure you know what you’re doing,” Patton said. “You get so much hands-on experience, and the professors want you to get that experience.”

She enjoys working hard, but she also does it for her daughter, Serenity.

“It’s hard to come back to school,” Patton said. “The fact that I came back, am at the finish line and knowing my daughter will see me walk across the stage is such a rewarding moment.”

Now that she’s earned her degree, she wants to encourage other mothers to go back to school.

“Time waits for no one,” Patton said. “Don’t let anyone hold you back. There are so many resources here at APSU that will help you figure things out.”